How to get there

Dunbartonshire Wind Ensemble-DWE to players and friends of the Ensemble-aims to give young people still at school the chance to experience the pleasure of playing a wide range of wind music in our relaxed and friendly band which has members drawn from a wide range of schools in and around Glasgow.

A particular feature of DWE is the provision of musical leadership through a Musical Director and occasional sectional tutors drawn from the ranks of professional instrumentalists active in the orchestras of Scotland.

DWE plays published compositions carefully selected by our Musical Director to extend and interest all our players. In recent years our repetoire has been largely drawn from film and stage music supported by strongly rhythmic compositions and harmonically varied arrangements of traditional themes. Each year new material is rehearsed and aired at a number of public performances.

Our Musical Director Robert Baxter has directed DWE since 2004. A knowledgeable and gifted communicator Robert encourages all our new and young players whilst setting and maintaining standards of performance with good natured relaxed authority. By profession, Robert is a freelance trumpet player and conductor who is also a young married man who lives in Blanefield, a small community to the north of Glasgow. Robert recalls playing with DWE as a youth before going on to the Royal Scottish Academy of Music and Drama where he graduated with a BA. Since graduating Robert has worked as a player with the BBCSSO, Scottish Ballet, RSNO, Scottish Opera and SCO. Further afield he has worked with the New London Consort, Goldberg Ensemble, Tenerife Symphony Orchestra and the Singapore Symphony Orchestra. On a smaller scale Robert is also a founder member of the Athenaeum Brass Quintet and the Scottish Trumpet Consort. A versatile player, Robert has also worked on numerous West End touring productions including ‘The Sound of Music’, ‘Fiddler on the Roof’, ‘Barnum’, ‘Cats’ and ‘Me and My Girl’.

As a Musical Director, Robert not only directs DWE but, since 2000, has been Musical Director of Dunbartonshire Concert Band with whom he has recorded a number of CD’s and has toured to Gozo, Malta and to the World Wind Band Festival in Schladming, Austria. Robert is also Conductor of the Helensburgh Orchestral Society.

Committed as he is to the advancement of youth music, Robert works regularly for NYOS and WOSIS either as a brass instructor or on the audition panels. He has adjudicated numerous school music competitions and for many years taught at Glenalmond College and at St Mary’s Music School as a visiting brass instructor.

The Trustees and the players in the Wind Ensemble are delighted to have such an able and committed Musical Director as Robert to guide us through the world of group music making.

The music we play is aimed at amateur musicians aged 10 and upwards who can read music to about Associated Board Grade Three Standard minimum. The sectional nature of the arrangements we play allows new players to be slotted into a section without the need for audition. We always welcome older players, whether they are parents or inexperienced adults, just so long as they are young at heart and enjoy wind band music.

If you can read music and play clarinet, flute, piccolo, oboe, bassoon, saxophone, trumpet, trombone, French horn, euphonium, tuba or percussion, we have band parts waiting for you.

WE ALWAYS WELCOME NEW PLAYERS AT REHEARSALS SO DO NOT HESITATE TO COME ALONG AND SAMPLE PLAYING OUR MUSIC. THERE IS NO CHARGE FOR SAMPLING. Contact us>>>

In order to enrich the sound of DWE without incurring expense to players or parents we own a number of large and expensive instruments which we give to members of DWE to play in the band or simply to try as a possible second instrument.

We have the following instruments available for members of DWE to try, tuba baritone saxophone, vibraphone, drum kit, xylophone and a set of tuned timpani. 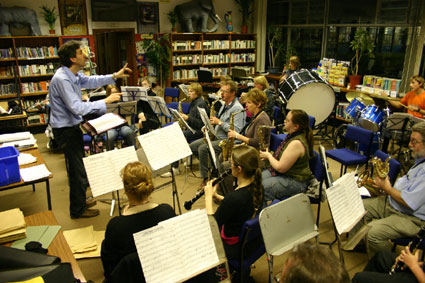 DWE rehearses throughout the school year on Tuesday evenings 19.00hrs to 21.00hrs in the assembly hall of Douglas Academy music school Milngavie.

As we rent the hall from East Dunbartonshire Educational Authority, players should arrive at least 15 minutes early to set up our equipment for a prompt start. We do have a 10 minute break half way through the evening but again we must restore the hall to its original condition before we leave at 21.00hrs.

Playing in DWE under the direction of a professional musician in a rehearsal hall environment introduces young players to the group and self-discipline required to produce music which is both melodic and rhythmically accurate. Many young players become more willing to practice when part of a band and all our players are encouraged to take their music home to practice with the help of their instrumental tutors. Rehearsal evenings and public performances assist young people further in the development of concentration, social skills and group commitment.

How to Get There

Douglas Academy Music School is situated on the Northern outskirts of Milngavie and can only be accessed from the service entrance sign-posted off Craigton Road.

Alternatively travelling North towards Drymen on the A809 along Stockiemuir Road at the first roundabout take the third exit (B8050) to Milngavie. At the next roundabout take the second exit onto Hunter Road. When you reach the Tee junction turn left onto Craigton Road.

Dunbartonshire Wind Ensemble Trust has made strenuous efforts to ensure the wellbeing of all our players attending rehearsals.

Disclosure Scotland now requires all organisations to obtain the permission of parents before children can take part in activities where they might be photographed. We seek permission from parents on our Membership Form and would ask parents to consider this issue carefully and advise their child as well as us of their decision.